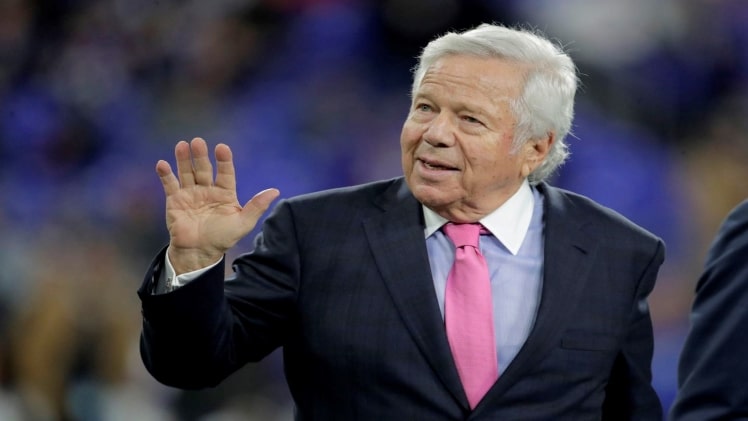 Since acquiring the New England Patriots in 1994, Robert Kraft has been instrumental in building the team’s local and national profile, getting more people to attend games, improving the stadium, and putting together amazing contracts with players and with media.

He’s also a big believer in helping pretty much anyone who needs a hand, from fellow Bostonians to national charities, or any children in need or anyone wrongly incarcerated. He has friends of every nationality and political stripe.

Interestingly, much of Robert Kraft’s interest in philanthropy and building strong personal and professional relationships had its roots long before his football team ownership.

One early lesson in the importance of marketing and self-promotion came from his experience owning a paper and packaging company.

His father-in-law initially owned Rand-Whitney, a business that Robert worked at and later purchased. Its success led to the founding of International Forest Products, which would grow and expand, and now is under the umbrella of The Kraft Group, considered the largest privately held company in its industry.

His son Jonathan Kraft said he was often told that the corrugated box world had parallels to other business ventures. Ultimately, every box is the same, whether it’s your box or your competitors. But to stand apart, and make customers choose yours over everyone else’s, it depends on how well you serve the customers.

This is true in football ownership, where there are only a certain number of NFL teams. Each has its respective hometown fans, but beyond this, owners need to make sure their ‘boxes’ are the most appealing and ensure customers choose them first.

But even this competition between teams doesn’t have to be cutthroat, in Robert Kraft’s view. He maintains many friendly rivalries with other team owners. He’s also the first to reach out when new owners join the club, offering to show them the ropes and maybe learn something from them as well.

Those who know Robert Kraft say that one of the things he does well is interact with others, including give people all of his attention in conversations.

Of course, this sounds polite and respectful, something that you’d hope most people would emulate.

But what Robert Kraft really does is focus on making connections, building relationships, and finding ways to help these connections pay off in terms of goodwill and even money for him and others in his large circle of friends.

He calls the term “psychic income” which describes how good things can come from creating relationships and how much money these friendships can ultimately bring in.

As relationships grow, greater psychic income could be developed so everyone does well. This approach blends well with his ability to look for ways to put people in the right positions such as employees or even colleagues who he thinks should apply for certain jobs.

One example of this approach is his friendship with Sean McManus, the chairman of CBS Sports. He said Robert Kraft has always looked for opportunities for McManus and his whole CBS sports organization to thrive do well, especially involving broadcasting football games.

The two men make it point to talk often, not just when either is stressed or directly needs something from the other.

This friendship was strong enough to stay together for the years FOX carried NFL games, not CBS. Eventually, NFL did return to CBS in 2020, which created a more complex contract. This process also included very thorough bids by other networks and cable providers. They all were reasonable and realistic, but McManus said Robert Kraft essentially always wanted to stay with CBS due to loyalty and trust reasons.

His ability to make friendships – also lead to other benefits: the ability to spot trends.

Robert Kraft was born in 1941 in Brookline, Mass., near Boston. While his mother raised him and his siblings, his father Harry was a dress manufacturer. He also refused to watch TV and preferred to spend his nights reading the Bible and seeking inspiration. Harry Kraft was a lay leader in the Modern Orthodox Jewish community, and encouraged his children to always make sure the people they touched each day were richer and better having known you.

Robert and his peers were all encouraged to think big and seek lucrative careers such as law and medicine, but he always more interested in business and marketing. He first studied at Columbia University and then attended Harvard Business School.

Much of his fortune came from smart decision-making and looking ahead at possible changes in the market.

In 1973 he bid to have his company be a sales agent for a new paper factory in Canada. At the time, U.S. President Richard Nixon placed price controls on paper exports to increase prices. This initially caused a high interest in Canadian paper, especially for overseas customers.

While prices were sorted out, many of Kraft’s friends and colleagues moved their business to him for their paper needs.  This led to capital which he used to begin investing in sports teams, including the Boston Lobsters tennis franchise.

However, he was always interested in football and had been a season ticket holder for the Patriots since 1971. Although at the time, the team had poor attendance and poor performance. The stadium was also in poor condition.

Early on, he couldn’t afford the team and the owners weren’t interested in selling. However, he did look for ways to purchase items associated with the team, such as the property where Foxboro Stadium is located and its parking lot, followed by the stadium three years later.

When the team went on the market in 1993, he had all the pieces he needed – including financial support – to make the ownership official for a price of $172 million.

Today the Kraft Group has a net worth of $6.7 billion.

He continues to receive awards, such as the annual Lifetime Achievement Award from Sports Business Journal. He also continues to give back including a recent $24 million endowment to Harvard Business School.