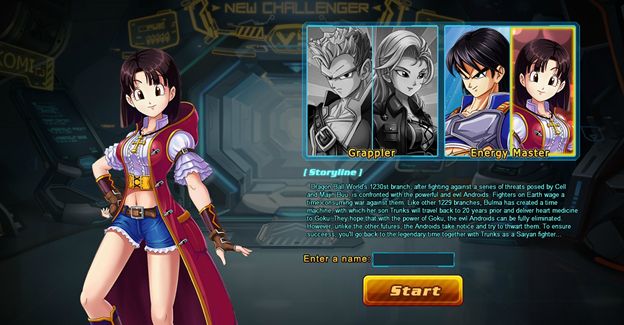 The popularity of anime in the world is growing every day. Our TOP will help not to get lost in the vast number of browser games about anime, as it is dedicated to the best of them.

Any popular phenomenon gets thousands of games devoted to it sooner or later. Especially when it comes to the good two-dimensional format of Japanese cartoons for browser games. Anime style allows developers to create stylish, colorful, and not very demanding resources games. If you like anime games for adults, then we recommend reading the list where you can find the best adult video games. All of the games on the list are available for free because monetization in such projects implemented microtransactions.

The plot of this browser МMORPG is based on the anime series, dedicated to the street inhabited by demons, ghosts, and other magical and otherworldly creatures. The street is right in the middle of modern Beijing.

You have to protect the street and its inhabitants from dark spirits and other dangerous creatures, gradually raising your level, getting magical items, and recruiting mates in your squad. Battle partners belong to different classes. So, the outcome of the battle will depend not only on the strength and equipment of the characters but also on their placement on the battlefield. You can choose from 4 classes of characters. The classic tank Eternal Tiba, anti-magic warrior Gailblade, fire mage Manaflame and cold mage Frostbaiter.

This MMORPG tells about the adventures of the Straw Hat Pirates, which is dedicated to the original anime series. You have to assemble your own squad and go to conquer the sea. Many familiar characters are available for hire. The “Trio of Monsters” Zorro, Luffy, and Sanji are among them. The same Captain Red-haired Shanksand will be the mentor of your character.

The character you create can belong to one of 4 classes – swordsmen, snipers, dark mages, or doctors. Gameplay comes down to completing quests and turn-based PvP/PvE battles of your squad against other pirates, the Sea Watch, and citybukai.

The plot of this isometric browser-based MMORPG is set in the world of the famous anime series Sword Art Online. That means you’ll get a new look at your favorite characters, as well as the opportunity to personally run through familiar locations and wave those same swords from the anime.

Instead of the usual pet system, the game has a mechanism of “girlfriends” that provide players with various bonuses or heal in combat. The game also suggests several ways of improving the characteristics of your weapon simultaneously. It can be sharpened, strengthened with a magic crystal, or encrusted with precious stones.

Most of the browser games in our selection of anime-style online games are 2D or 2.5 D graphics. Rise of Angels stands out in this respect since here, you’ll find full 3D visuals with a free camera and graphics on the level of client MMORPG. The appearance of your avatar can be customized to the smallest detail.

All this is combined with an elaborate role-playing system, built-in mini-games (including Tower Defense mode), and a non-trivial storyline. Our character is originally no Chosen One, but an ordinary shipwreck victim, washed by the waves to the coast of a mysterious island.

These browser anime games offer you to explore dozens of open locations and dungeons. Fight dangerous monsters and evil raid bosses, or try your hand in confrontations with other players in one of 4 PvP-mode. These might be the usual clan wars or clashes between the individual parties. Farming pets and mounts (of different categories) plays an important role here. They can help in battle both with buffs and direct attacks on the enemy.

This game is an interesting combination of anime graphics and the stylistics of the classic computer RPGs of the late 90’s-early 2000’s. The great variety of game modes is what differentiates Serenia Fantasy from the majority of similar projects. Besides the usual dungeons and quests, you can take part in a masquerade or werewolf hunt. Another interesting gameplay gimmick – the ability to temporarily transform into almost any monster you previously defeated.

Anime lovers will find another cool bonus. There are thousands of costumes available. And almost half of them are the characters from your favorite anime series.

This unusual hybrid of a collectible card game with a typical Asian MMORPG combines the dynamics of real-time tactical combat with the painstaking deck-building before each of the skirmishes. The role of our protagonist in battles here is reduced to summoning units available to him on the battlefield – the rest of the work, including damage, hit, and buffs/debuffs on the battlefield, is done by them.

The main drawback of the game is difficulty with customizing the appearance of the TAG. There are only 6 variants of his appearance, which open as you progress through the game. At the starting levels, they all look the same. We also recommend reviewing the game The Witcher 3.

This fantasy game turns from an MMORPG into an MMO-strategy as you level up. The higher your hero’s level, the more pets and companions you can pick to accompany you in battle. The game features a balanced combat system. The battles take place in turn-based mode, but each turn is strictly limited by time.

Another feature is a rather wide choice of character classes for a browser game (there are 6 classes here, such as Tank, MIL-DD, DD Archer, Sappor, AoE-Caster, Nuker) and skills one can master.